Sports, Asia, and the World

Back to search results 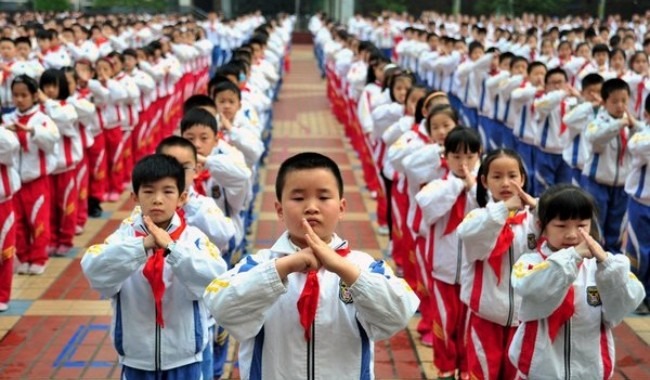 Students practice martial arts for the first time during morning exercises at Jiujiang Primary School in east China’s Jiangxi Province on May 3rd, 2013. The school has choreographed a special set of morning exercises combining traditional martial arts and poetry recitation since the beginning of the spring 2016 semester. Source: Xinhua, courtesy of Imgur at http://imgur.com/L5rGsoB.

As an eighth-grade junior high graduation present, my parents offered me two options; both Boy Scout-Related: Spend several weeks at the fabled Philmont Ranch (camp) in New Mexico, or travel via train to the Boy Scout Jamboree in Valley Forge Pennsylvania, and then with the troop, to the New York City World’s Fair. Upon examining itineraries, my choice at age thirteen was a no-brainer and had little to do with the afore-mentioned events: The jamboree trip included two New York Mets-Milwaukee Braves baseball games in Shea Stadium; my first live professional baseball attendance chance!

Throughout Asia, North America, and the world, massive numbers of people derive joy from playing and watching sports. Sports also offer opportunities for teachers and students to explore a variety of topics that facilitate a better understanding of human action, cultures, societal values, and much more. The following sports-related essays and reviews are culled from the EAA Digital Archives:

Leonard Sebastian in “What Soccer Means To Me: National Integration through the Prism of Soccer in Singapore” (Volume 21, Number 2, Fall 2016) writes a moving autobiographical account of how in Singapore, the experience of playing the sport together was a centripetal force for youngsters in a multiethnic society.

Anni Kajanus, an anthropologist and practitioner of karate and jujitsu for almost two decades, and in Nanjing to do research in two primary schools, finds herself, after mentioning her avocations, teaching weekly karate classes to second graders while also carrying out research. In her essay “Physical Education in Chinese Schools: Role Models, Repetition, and Winning” (Volume 21, Number 2, Fall 2016). Kajanus begins with the specific; her early classroom failures and how the advice of Chinese teachers regarding classroom management and their use of role models made her more effective. The author also devotes a substantial portion of her article describing how Chinese physical education—and relations with outstanding athletes—are influenced by Confucian concepts, Maoism, and the current regime’s attempted use of soft power. This article is appropriate for both high school and beginning college and university survey-level courses.

Producer and Director’s Yuriko Gamo Romer’s documentary Mrs. Judo: Be Strong, Be Gentle, Be Beautiful, reviewed by David Huebner (Volume 20, Number 2, Fall 2015), chronicles the life of Fukuda Keiko, (AKA “Mrs. Judo) a true trailblazer in her sport and the only woman to win the coveted Tenth Degree Black Belt in Judo’s recorded history that began in 1882. Gamo Romer’s fifty-eight-minute award-winning film is available on several streaming services or for purchase. Please see information about this filmmaker’s more recent project in the “Other Teaching Resources” section of this column.

Dan Metraux’s “Baseball in Japan and the US: History, Culture, and Future Prospects” (Volume 21, Number 2, Fall 2016) is an excellent introductory overview of the sport that American English teacher Horace Wilson introduced in Japan in 1872 and a game Americans have played in one form or the other beginning in the eighteenth century with a local derivation of the British “Rounders” game. Documentation exists that the first American President was an avid and skilled “Rounders” player. Readers who want to learn more about Japanese baseball and multiple, mutual Japanese and American baseball interactions, are highly encouraged to explore the PDF endnotes for even more rich content available online on Japanese baseball and American and Japanese baseball-related topics.

As contemporary North American baseball fans know, Korean baseball players are now famous in the US major leagues. The Korean film YMCA Yagudan (YMCA Baseball Team, 104 minutes, available with English subtitles), reviewed by Jina Kim (Volume 14, Number 3, Winter 2009) tells the story of Japanese bringing baseball to Korea in 1905 during the colonial period. Avoiding “spoiler alerts,” inquisitive readers might want to do a search on reviews of the film online that are positive, but quite different from the also favorable EAA author’s perspective.

Instructors and students interested in this topic are highly encouraged to visit this website from Flying Carp Productions, one of two about the in-progress documentary film project Diamond Diplomacy by Yuriko Gamo Romer with excellent content and resources. The first treat from the Flying Carp Productions website is a short video tribute to former San Francisco Giant pitcher Masanori “Mashi” Murakami, the first Japanese to play in the US major leagues. The clip was filmed at Giants AT&T Stadium in 2014, the fiftieth anniversary of Murakami’s September 1964 first major league game appearance in Shea Stadium against the Mets. No spoiler alerts but the clip would make a fantastic “bell ringer.” The site also has a nice overview of the video project. Visit the “About” page and meet Rob Fitts, a story consultant and co-writer for the film. Fitts also published the book Mashi: The Unfulfilled Baseball Dreams of Masanori Murakami, the First Japanese Major Leaguer (University of Nebraska Press, 2015) which is available for a modest price through Amazon. Instructors and students can register for further information on the film at the bottom of the “Contact Us” page.

Visit the main Diamond Diplomacy website for even more information about Japanese and American baseball including content about interned Japanese Americans and baseball in the World War II Internment camps. The social media project #150Stories on the website chronicles the 150th anniversary of the arrival of baseball in Japan by marking 150 stories about baseball legends and key figures in US-Japan baseball history. Users can scroll through the timeline and read brief social media posts on events such as MLB All-Star Ichiro Suzuki’s 2019 retirement and watch short videos such as Dodgers pitcher Hideo Nomo’s 1996 no hitter against the Rockies.

Full disclosure: Murakami-San and I have never met but I owned his 1964 Topps baseball trading card and both of us in the same year visited Shea Stadium for the first time! See my introduction.